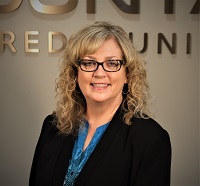 The Board of Directors of Mountain Credit Union (MCU) in Waynesville, NC, recently announced that Amy Woody has officially taken over the position of Chief Executive Officer (CEO). Her predecessor, Patty Idol, had been President / CEO since 1999 and retired earlier this month. Woody has over 29 years of credit union experience, including a total of 23 years at Mountain Credit Union. Her career with MCU began in 1985 when she helped open their branch in Fletcher, NC. She was promoted to Branch Manager during her years in Fletcher and worked there until 1991. After working for Community Bank and McDowell Cornerstone Credit Union in Marion, NC, she returned to MCU in 2003 in the role of Executive Vice President.

Before being named CEO, Woody had been responsible for Branch Operations, Lending, Collections, Compliance, ATMs, and Human Resources. As MCU has grown over the years, Woody developed the positions of Compliance Officer and Collection Manager and was over the hiring or promoting of staff to these positions.

“I am excited about my new adventure as CEO of Mountain Credit Union,” Woody said. “I am so fortunate and I consider it an honor to lead such a great team. I see great things in our future as we continue to improve the financial well-being of our members.”

Woody graduated from Appalachian State University in 1983 with a degree in Business Administration, majoring in Economics and Finance. She is involved with the Carolinas Credit Union League (CCUL) and has been a member of the CCUL Board of Directors since 2018. She has also been involved with the Western Chapter of the CCUL, having served on the Western Chapter Board from 2014 to 2018. She is also active in several civic organizations and her church.